5 reasons why ad blocking is growing

Discover the core drivers behind the adoption of ad blocking software and platforms by consumers and how advertisers can counter the drop in revenue.

According to Statistia, 27% of all internet users worldwide prefer to block ads. In large part, this is because of the negative and invasive practises some website owners, and advertising networks have adopted over the years. The most common of these practises detailed below coupled with thoughts on how advertisers and publishers can better deliver ads in a way that’s friendly for the user, whilst reaching maximum revenue potential.

Format trends in display advertising in 2019

What is outdoor advertising and how can you utilise it?

According to AdLock, uninteresting ads are the most repelling especially for a young audience. Users tend to feel annoyed when advertisers don’t put enough efforts into creating an advertising campaign or convincing proposition. In these cases, they would almost always prefer instead to block an ad or all ads rather than have terrible advertising campaign follow them around the internet as they browse.

Thus, spending time, money and thought on developing interesting advertising campaigns and assets that capture attention is very important, it can make the difference between a user who engages with ads or one that blocks them on a particular website or all together.

The leader of the pack in this category is autoplay video ads, especially with sound. You can’t earn the trust of the users if you force them to watch your ads or leave them deaf. More than 50% of internet users admit that auto-playing video ads were the reason they installed an ad blocker. Google even included those to the list of unacceptable advertising along with large sticky ads and pop-ups.

One of the major lessons here is to avoid using these types of ads no matter how much money autoplay or other types of invasive advertising might make in the short term is that long run they will only harm the revenue potential of advertisers and publishers.

“I’m fine with seeing ads but only if they are not annoying” – that’s how 68% of users respond when asked how they are willing to support websites. Furthermore, 70% of those users consider pop-ups one of the most annoying and intrusive types of ad. Such advertisements interrupt browsing experience and are almost always difficult or in some cases impossible to close on the first try (in some cases redirecting to some suspicious websites). Redirects are especially trashy for mobile browsers, and users always try new ways to shut them off.

Apart from avoiding using pop ads, the lesson here is to make sure your advertising campaigns are not annoying to the reader either in terms of the mechanism which they are delivered through or for a myriad of other reasons (like colourful flashing animated banners). You can avoid this issue by thoroughly testing ads locally and via paid services to see how users react.

Although this trend is reversing, there are still many websites that force users to enable ads before entering a site. This is typically done bu running anti-blocking scripts that require a user to allow a website to advertise or disable an ad blocker altogether before entering.

This tactic is harmful to a publisher or advertiser as in the majority of these cases; users will simply become annoyed at being blocked and leave for another website.

Bad or malicious advertising is a disservice to advertisers, publishers and users. Most websites host third-party ads and have little to do with the quality or creation of such ads, in some cases even with larger platforms like Google Adsense, the occasional malicious ad or link can be inserted, creating a real security concern for users.

For example, in 2016 Forbes.com suffered a big security embarrassment because of an ad. First Forbes.com held content until users disabled ad blockers and when they did so, they immediately got a pop-under with malware.

The future of ad blocking

Ad blocking is moving away from blocking all forms of advertising, and towards only blocking the advertising that users object to / find invasive, even Google has recently adopted blocking for what they consider negative ads into their Chrome browser.

The fact remains advertising is still the primary form of revenue for most online publisher and platforms, as the interest evolves maybe this will change, but for now, advertisers and publishers should focus on adhering to the guidelines set forth by the Coalition For Better Ads to create a better and fair experience for the user.

Format trends in display advertising in 2019

What is outdoor advertising and how can you utilise it?

With so many businesses launching on a daily basis, whose first port of call is the advanced targeting platforms of... 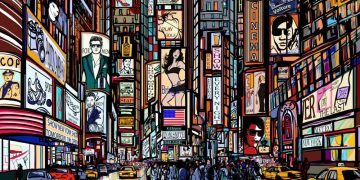 Selling your goods or services abroad isn’t quite as simple as just making your product available to purchase and waiting...