5 ways to raise your visual content marketing game for 2021

Today, over 90% of businesses are active on social media, and they’re all competing for audience attention.

As the amount of content being shared has risen, the quantity and quality of engagement with organic content has steadily dropped. This isn’t news, mind you – it was over five years ago that marketers first started lamenting the demise of organic reach. Today, paid content drowns out organic, and the typical engagement rate for a Facebook post doesn’t even reach 0.2%.

At the same time, consumers aren’t following brands as much as they used to. It’s partly because there are simply too many, sharing too much and too often, for people to keep up. But the rise of time-limited Snapchats and Instagram Stories also led consumers to expect the very nature of social media interaction to be more fleeting and ephemeral.

People have moved away from the concept of a long-term brand relationship. Although marketers cling to the comforting truth that visuals are the best way of grabbing consumer interest, competition is fierce here as well. In 2019, 74% of marketers said that their content contained a visual, up 10.5% from the previous year, while 62% of brands post visual content more than twice a week, so your visuals too are competing for eyeballs among a flood of other images.

Your content needs to be visually gripping enough that it stops consumers in mid-scroll, holds their interest, and convinces them to share it further for good measure. As challenging as this is, it’s still possible. Here are some tips for achieving it in the year ahead.

Add motion to your still photos

Amid this sea of visual content, photos remain immensely popular. A report by HubSpot found that posts with photos and still images even outperform video posts.

But don’t get the wrong idea. Nobody’s interested in boring stock photos. Now that even phone cameras produce sharp pictures and come loaded with all kinds of filters, bland photography doesn’t stand a chance. You need to up your game with advanced effects, like using Lightricks’s Pixaloop app to create motion in the background of a still photo. There’s no way you’d mindlessly scroll past this.

You can choose which parts to freeze and where to add motion, which direction it should run in, the speed, and more. Pixaloop has a whole range of cutting-edge special effects that aren’t your run-of-the-mill filters. These include 3D photo animation, background changers and overlays.

Comics are accessible, friendly, and a great way to add humor, especially when your subject matter is heavy or complex. A well-composed comic can convey a large amount of information, while still being entertaining enough to stop your target audience in their tracks.

Or think of Red Bull’s cartoon drawings. They’re instantly recognisable, whether you see them as still comics or as animated cartoons. Plus, they’re funny.

The best way to encourage audiences to stop and engage with your visuals is to make it possible for them to interact with them. Interactive infographics invite the user to become part of the data visualisation process.

Unlike static infographics, they don’t begin until the viewer clicks the button. Then they unfold at the user’s own pace, making it even easier to absorb information in bite-size amounts. It’s an excellent way to present complex data with multiple layers, while keeping it accessible and attractive. 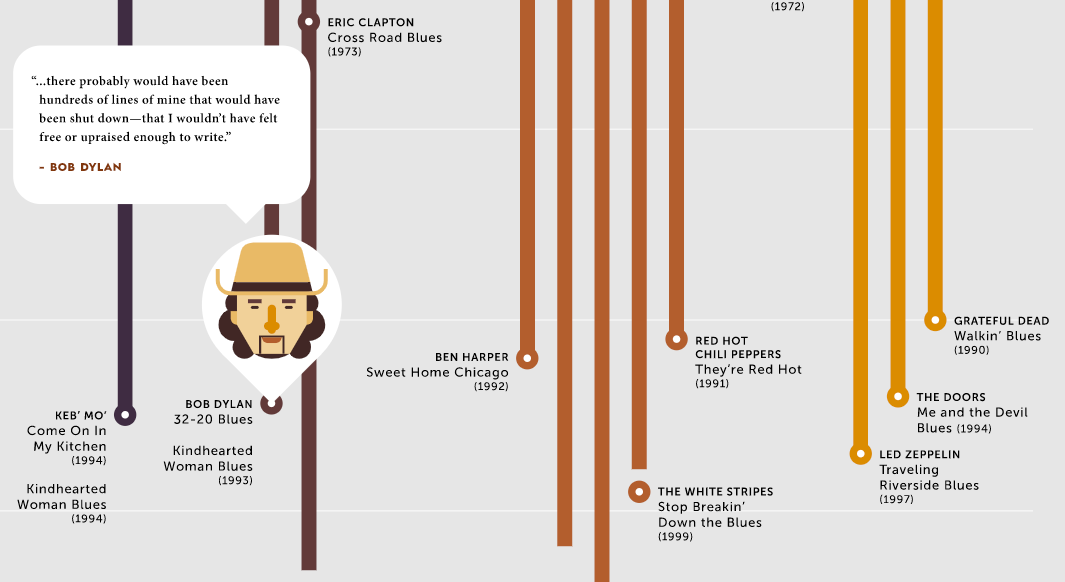 At the same time, interactive infographics like this history of African-American music culture, deliver an immersive experience that goes way beyond a flat, static infographic. The user gets to choose which data is the most relevant, which areas they want to explore, and influence the direction of the data narrative.

Most marketers have a set of rules that ensure consistent brand messaging, but it’s less common to have guidelines for consistent brand visuals. Use Canva or Spark Post to make templates and style guides that establish your visual language, so your brand images are always recognisable even when the content changes.

If you look at Starbucks’s content, you’ll see that their branding is evident even when they’re promoting a new menu. Coke always uses its distinctive red and white colour theme.

Your visual language doesn’t have to restrict you to specific colours. You might carry your branding by applying the same layout and formatting to every visual, using the same fonts, or applying the same shading even when the colours are different. Think about Google Doodles, which change the rules every day but always incorporate the Google logo.

It is possible to produce visual content that stops consumers in mid-scroll and raises the profile of your brand, so hold on to visuals as part of your content marketing strategy. You just need the right tools and tactics.

What is commercial vehicle insurance and how does it work?

Valid motor insurance is a legal requirement to drive any vehicle in the UK. But many people do not realise ...

What is business car insurance and how does it work?

Every driver in the UK is familiar with motor insurance, a legal necessity for all cars on the roads. But ...

What is business loan protection insurance and how does it work?

Businesses rely on loans for all manner of reasons. In fact, the average UK business borrowing is £176,000. However, few ...